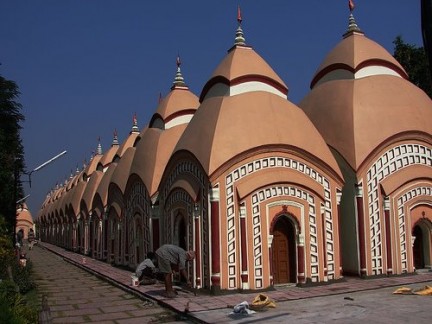 Bardhaman district (pron: bɔrd̪ʰomaːn) (also spelled Burdwan or Barddhaman) is a district in West Bengal. The headquarters of the district is Bardhaman, and it houses the cities of Durgapur and Asansol. In Medieval history, this area was known as Sharifabad.[citation needed]

The name of Bardhaman city, which lends its name to the district, comes from the 24th Jain monk Tirthankar Mahavir Bardhaman. Probably Mahavir was from a village named Ajahapur close to the NH2, near Memari Railway Station.

Bardhaman was important during Medieval age and while India was under British rule.

This fertile land was important even during the Gupta and Sena rule.

During the Mughal age, from the sixteenth century, Muslims came to the city of Bardhaman and set up a settlement in the outskirts known as Sharifabad. When Sufi pir Baharam had to leave Delhi because of the plots of Abul Fazal and Faizi, he came to Sharifabad. His tomb is visited by both Muslims and Hindus. It was an important administrative center and was the seat of a fouzdar since the days of Mansingha.

Since then Bardhaman has been ruled by the Khetri Maharajas commanding a large territory and operating through Sananads obtained from Mughals. The Maharajas of Bardhaman faced the Nababs of Murshidabad firmly and were the main cause of survival of the Hindus against the forced mass conversion by Murshidkuli Khan and his successors.

The district was acquired by the East India Company under the treaty with Nawab Mir Qasim in 1760 and confirmed by the emperor Shah Alam II in 1765. The land revenue was fixed in perpetuity with the zemindar in 1793.

In 1901 the population was 1,532,475, showing an increase of 10% in the decade. At the time, there were several indigo factories and the weaving of silk was the chief local industry. In addition, Bardhaman contains the great coal-field of Raniganj, where coal mining in India started in 1774, the enterprises first becoming corporatised around 1820 by Alexander & Co, and then under the leadership of Prince Dwarkanath Tagore, who bought over the existing collieries in 1835, eventually forming the Bengal Coal Co. in partnership with Gilmore Hombray and Co. in 1843. Other large firms started additional coal mining operations in Raniganj, including Birbhum Coal Co., Equitable Coal Co., Madhu Roy and Prasanna Dutta Co., Bird and Co., South Barakar Coal Co., Andrew Yule and Company Ltd. and Balmer Lawrie. By the early 20th century, an ouput of more than three million tons established Ranigunj coalfields as the major producer of coal in the country.[3]

Post independence, Bardhaman became an important economic hub in West Bengal because of its location and due to the natural resources in the region (especially coal).

Bardhaman District has an area of 7,024 km² and a population of 6,895,514 (2001 census). It is bounded on the north by Birbhum and Murshidabad districts, on the east by Nadia District, on the southeast by Hooghly District, on the southwest by Bankura and Purulia districts, and on the northwest by Dhanbad district of Jharkhand.[4] The district has six sub-divisions: Asansol, Sadar (North), Sadar (South), Durgapur, Kalna, and Katwa. It was amongst the first districts to have a 100% literacy rate.

Bardhaman is the most advanced district in West Bengal industrially and agriculturally. The eastern part is enriched by the alluvial soil of Bhagirathi River (minor stream of river Ganges) and is one of the most productive agricultural regions in West Bengal. The western part of the district, chiefly Asansol, is rich in coal and other mineral resources. This part is highly industrialised and contains factories based on iron and steel processing, as well as many cement factories. Durgapur, Burnpur, and Kulti are in the western part of the district. It also contains power plants at Durgapur and Dishergarh.

Burdwan district with its varied tectonic elements and riverine features, is a transitional zone between the Jharkhand plateau which constitutes a portion of peninsular shield in the west and Ganga-Brahamaputra alluvial plain in the north and east. In general the Jharkhand plateau consists of the metasedimentary rocks of precambrian age, Gondwana sedimentary rocks, Rajmahal basalts and upper tertiary sediments. Laterite has developed on these older rocks as well as on early Quaternary sediments.

Tow the south, the alluvial plain merges with Damodar-kasain-Subarnarekha deltaic plains. The western half of the district resembles a promontory jutting out from the hill ranges of Chotonagpur plateau and consists of barren, rocky and rolling country with a laterite soil rising into rocky hillocks, the highest being 227 m. These diversify the otherwise monotonous landscape and lend a special charm to the skyline around Asansol subdivision. Ajoy-barakar divide is a convex plateau, the average altitude being 150 m. The gradient is westerly to the west and to the east it is northerly toward Ajay and southerly toward Damodar below the latitude.

The Ajoy-Damodar inter-stream tract is made up of several stows consisting of vales and low convex spurs which run in almost all directions except northeast and thus lends a very complicated character to local relief.

The river system in Burdwan includes the Bhagirathi-Hooghly in the east, the Ajoy and its tributaries in the north, and the Dwarakeswar, the Damodar and its branches in the southwest. Besides, there are innumerable Khals and old riverbeds all over the area. The notable rivers and khals are Damodar, Bhagirathi, Barakar, Ajay, Dwarakeswar, Nonia, Singaram, Tamla, Kukua, Kunur, Tumuni, Khari, Banka, Chanda-kanki nala, Behula, Gangur, Brahmani, Khandesvari, Karulia nala, Dwaraka or Babla, Koiya nala, Kandarkahal, Kanadamodar, Kananadi, Ghea, Kakinadi etc.

Different types of soil are encountered in topographical biological, hydrological, and geological conditions in the Burdwan district. In the west, coarse gritty soil blended with rock fragments is formed from the weathering of pegmatite, quartz veins and conglomeratic sandstones, where as sandy soil characteristic of granite rocks and sandstones. This soil is reddish, medium to coarse in texture, acidic in reaction, low in nitrogen, calcium, phosphate and other plant nutrients. Water holding capacity of this soil increases with depth as well as with the increase of clay portions. Towards the east alluvial soil attains an enormous thickness in the low level plains to the east. This alluvial soil is formed of alluvium brought down by the Ajay, Damodar, Bhagirathi and other rivers. These soils are sandy, well drained and slightly acidic.

Burdwan is one of the premier districts in India in value of minerals. The Raniganj coalfield was the birthplace of the Indian coal industry. Besides coal, important minerals found in the district are iron ores, calcium carbonate, abrasives, silica bricks and moulding sands, glass sands, building materials, manganese, bauxite, laterite etc.

There are many tanks, wells, canals, swamps and bils all over the district. In the Damodar Valley region, there are around 17000 tanks. The Durgapur barrage and Mithon dam have formed two large reservoirs at the southwestern and western periphery of the district.

The forest areas of the district are chiefly in the lateritic and red soil highlands in the Aushgram PS of Sadar subdivision and in the Asansol subdivision.

In Ausgram P.S. the forest areas are interspersed with paddy fields. The Durgapur forests are continued in the Birbhum district beyond the Ajay while the forest area in the Asansol subdivision forms a part of the forest area of Dumka District of Jharkhand.

The district experiences a climate which is transitional between CWg and AW types, where ‘C’ stands for ‘warm temperate rainy climates with mild winter’, ‘W’ for ‘dry winter not compensated for by total rain in the rest of the year’, ‘g ‘ for ‘eastern Ganges type of temperature trend’ and ‘AW’ for ‘tropical savanna climates’.

Average temperature in hot season is 30 C while at the cold season is 20 C. Average rainfall is 1496 mm. The cold season starts from about the middle of November and continues till the end of February. March to May is dry summerintervened by tropical cyclones and storms. June to September is wet summer while October and November is autumn.

Bardhaman is the district headquarters. There are 32 police stations, 31 development blocks, 2 municipal corporations, 9 municipalities, 277 gram panchayats and 2438 villages in this district.[5][6]

Other than municipality areas, each subdivision contains community development blocs which, in turn, are divided into rural areas and census towns. In total there are 66 urban units: 2 municipal corporations, 9 municipalities and 55 census towns.[6][7]

There are four urban agglomerations (UA).

The district is divided into 26 assembly constituencies:[8]

Ausgram and Mangalkot are part of Bolpur (Lok Sabha constituency), which has five other assembly segments from Birbhum district.

Impact of delimitation of constituencies

Khandaghosh constituency will be part of Bishnupur (Lok Sabha constituency), which will contain six other assembly segments from Bankura district.

Ketugram, Mangalkot and Ausgram will be part of Bolpur (Lok Sabha constituency), which will contain four other assembly segments from Birbhum district.