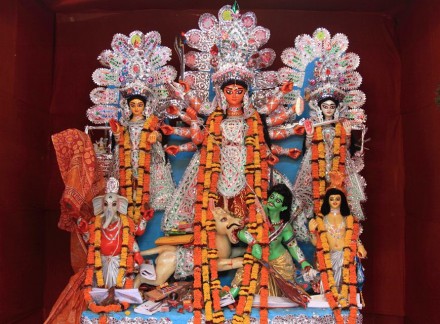 The Sabarna Roy Choudhury family today is spread throughout the whole World. The main settlements are at Barisha, Halisahar, Uttarpara, Nimta, Birati, Kheput etc. In all these places the family members believe in one  tradition, culture and faith. Everywhere the legacy of Laksmikanta continues.

At the biggest settlement at Barisha itself about two thousand family members live. The settlements at Barisha are divided into nine houses. Today each of these nine main houses have expanded into a number of other buildings creating a Para on the name of the main house due to expansion of the family. But still the basic bond of a single joint family has not been destroyed due to the western influences. During any festivals or social programmes every member of the family try to participate and enjoy the very occasion.Thus everywhere in the Sabarna Roy Choudhury family, a bond of brotherhood and an idea of a big joint family can be seen.

This is a typical image of our Durga.  The oldest  idol of Aatchala. All the eight Durga Pratima are being created almost in the same manner. The uniqueness of the Pratima is that it has Chaalchitras divided into three parts and have pictures of the the ten different images of Ma Shakti known as the Dasamahabidya. On one side of the Pratima there sits an idol of Shiva and on the other side its Rama. They are also being worshipped. The colour of the Durga is reddish or it can be of light golden as mentioned in theDurgabhaktitarangini. The Asura is green in colour depicting the evilness and jealousy in him. Here Karkikeya is dressed in the princely style. In total the Image brings hope and prosperity for the worshippers.

The  first settlement of the family at Barisha. Lakshmikanta constructed some sort of a Kutchery Bari soon after receiving his estates in circa 1608. Here he later constructed a traditional Chandi Mandap to house the first ever Swaparibara Durga Puja celebration of Bengal in 1610, inspired by his wife Bhagawati Devi. This brought for the first time Goddess Durga being worshipped with Lakshmi, Saraswati, Ganesha and Kartikeya. Today this Puja is considered as the oldest Durga Puja in Kolkata and is highly regarded among the masses. The adjacent Radhakanta temple and the twelve Shiva temples are also of traditional architectural pattern and are objects of interest to tourists.

Sabarna Barta is the annual tabloid published by Sabarna Sangrahashala during Durga pujo which highlights the new research works and activities undertaken by the Sabarna Roy Choudhury Paribar Parishad. Articles on various topics are also included in the four page tabloid.

When one thinks of the Durga Pujo of Kolkata, the very first name that comes to mind is that of the Sabarna Roy Choudhury family. Really here the pujo is not only unique but also a fusion of history, heritage and tradition.

After the grant of tax free Jaigir of eight parganas by Emperor Jehangir, Ray Laksmikanta Gangopadhyay Majumdar Choudhury and his wife Bhagabati Debi started Durga Pujo in autumn at Barisha in 1610 CE. For the very time in history Goddess Durga was worshipped along with her children – Lakshmi, Saraswati, Ganesha and Kartikeya in the same Chaalchitra, which later became the normal custom in the Hindu society.

In the Sabarna family the Durga Pujo is performed according to the rites and rituals as prescribed in Durgabhaktitarangini by Bidyapati.

As Sabarna family settled at different places and family grew bigger, it was decided to establish a few more Durga pujos in the family so that each and everyone could learn the rituals and carry on the legacy and traditions of the family generation after generations. Therefore today a total of eight pujos are being held. Aatchala Bari, Baro Bari, Benaki Bari, Mejo Bari, Kalikingkar Bhawan, and Majher Bari in Barisha while the seventh is at Birati Bari and eighth one at Nimta-Pathanpur Bari.

Exclusive rituals, rites and customs are followed during the pujo. A special pujo called Mashabhaktaboli is offered Mahasthami and Mahanabami to the presiding powers of Trilok including the Yoginis and the Upadevatas, believing that they too have cooperated with us to perform the pujo successfully. This is also the only Hindu family whereby Tri-dhara Sangam- Shakta, shaiba and Baisnab traditions are followed together reflecting a unique fusion of spiritual ideology.

It will not be untrue to remark that the Sabarna Roy Choudhury family has successfully upheld traditions and customs in its purest form for more than four Centuries now, and the legacy still continues…